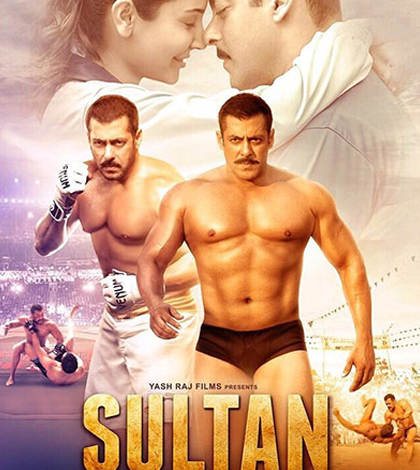 breakdown because his idea of bringing Mixed Martial Arts contests to India isn’t working out. His father advises him to rope in a local fighter, apparently because nobody thirsts more for victory than a “common
Indian”. The old man then suggests a name: Sultan Ali Khan.

Sultan (Salman Khan), a 40-year-old former wrestler, has seen the highs and lows of life. Going into flashback, we are introduced to Sultan’s younger self at a time when nobody could beat him in a sprint. A chance meeting with Aarfa (Anushka Sharma), an ambitious wrestler eyeing the Olympic gold, ignites a fiery passion in Sultan’s life. But then, if Bollywood has taught us anything, we know Sultan isn’t going to come upon his happy ending that easily.

Today, Sultan is just a shadow of his former self. Life has been knocking him down for years, but he has always known how to fight back. He knows he is down, but not out. The screenplay eases us into a world 100
kilometres away from the National Capital. Though the girls here struggle to make a mark, Aarfa leads a brigade that’s determined to make its presence felt. In a welcome change for Bollywood, Sharma actually talks about women emancipation in a language that isn’t confined to “Ghar me maa behan nahi hai kya?”.
Here, amid canal-side roads and large bungalows with ‘akhadas’, live some of the most humble and lovable people this side of Earth. They dance together, understand and respect each other’s needs, and cheer
for their wrestlers. The only problem is their star wrestler doesn’t flaunt a local accent. Salman’s dialect differs from that of his folks, but never mind, it’s the least of the issues. The director’s uncontrollable urge to make his characters break into a jig every now and then slows down the film. The songs consume time, and act as mere advertisements of Salman’s superstardom. However, that’s
also Sultan’s USP.

Sultan treads a predictable line until it reaches the climax. In the best part of the movie, Salman carries forward his Bajrangi Bhaijaan act. The man you see in the ring is down to earth, humble and quite unlike your typical Bollywood superstar. He is scared of his opponents, and fails to hide his pain despite being the strong, silent kind.Though Sultan keeps himself from throwing in the towel, he doesn’t act invincible either. He is aware of his age something no character played by Salman has done in the
past. For a change, it feels nice to hear him mouth sensible dialogues. The director’s biggest success lies in taming Salman’s overpowering persona. Zafar further breaks the film into three distinct acts, and the actor excels in each of them. From playing a done-and-dusted homegrown restler to a wonder-boy of freestyle fighting, you see Salman put up a performance like never before.

Sultan takes a cue from Tom Hardy’s Warrior, but that’s about it. The potbellied, middle-aged wrestler is mostly his own creation. Anant Sharma’s fantastic act as Sultan’s sidekick Govind is also notice-worthy.
Sultan has all the right ingredients of a ‘masala’ potboiler, and whistling and sobbing are likely to go hand-in-hand here. Don’t go looking for a twist ending, though. We all know what to expect from such a film, butit’s still a lot of fun to see the underdog win.

Just how to Boost Your Skills