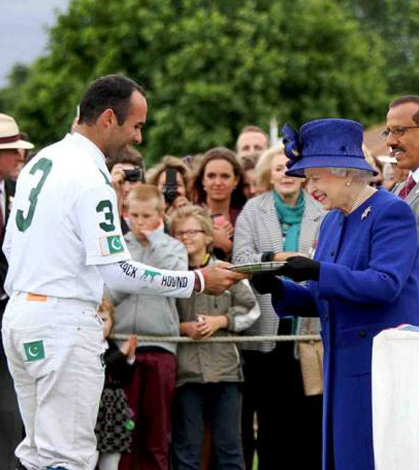 LAHORE: Hissam Hyder, Pakistan’s leading polo player, and Kassem Shafi’s Team Shalimar lost to Team Ferne Park by a single goal, 9 – 8, in the final of the prestigious Royal Windsor Cup 2013, according to a press release.
Her Majesty The Queen of England, among other members of British High Society, attended the concluding match of the tournament and distributed awards to the participating teams on the occasion.
The Royal Windsor Polo Cup is one of the most competitive and prestigious mid-goal polo tournaments in the world and features 18 leading teams who are participating in this year’s competition.
The final match was a high scoring and closely contested affair, with Ferne Park taking an early lead in the starting chukkers. A late resurgence by Shalilmar in the last 2 chukkers of the match narrowed the gap significantly in the latter half of the game, but unfortunately was not enough to see them through to the finish line.
Hissam, the highest handicapped player in his team, played for Kassem Shafi’s Team Shalimar along with Vieri Antinori (5 handicap), Nicolas Antinori (4 handicap) and Kassem Shafi (0 handicap).
Speaking about his Royal Windsor Cup experience, Hissam Hyder said “It’s disappointing to lose in the final match of a tournament, especially since we played well throughout the competition, but such is the nature of the game. I’m pleased with our overall performance, and am proud to say that we played top notch polo during the last 3 weeks. We held our own against the sport’s leading mid-goal handicapped players and made it to through to the Finals of the competition. We may have emerged as runners-up this year, but I am positive that we will bring home the gold in 2014.”
With a handicap of 6 goals, Hissam Hyder is presently regarded as one of Asia’s top polo players. Hissam has been named as the most valuable player in Pakistan on 6 different occasions and has represented the Pakistani Polo team officially in 3 different World Cups.
Internationally he has participated in top, high goal tournaments such as the 2012 Dubai Trophy in England, the 2012 Cope Presidente and the 2011 Duke of Cornwall Trophy among many others.
Born into a sports playing family in 1982, his father Irfan Ali Hyder and grandfather Brig “Gussy” Hyder, were both prominent polo players, with a handicap of 4 goals and 1 goal respectively. Hissam has eclipsed them both with a handicap of 6 goals and is presently ranked in the top 5% of the world’s polo players.
He will next be participating in The Eduardo Moore Tournament, a prestigious 12-15 goal polo competition, being held from June 25, 2013 to July 6, 2013.
Team Shalimar’s progress through the Royal Windsor Cup 2013
June 1, 2013: Shalimar 8 vs Emlor S 7
June 5, 2013: Dell Park 9 vs Shalimar 8
June 13, 2013: Shalimar 10 vs Clarita Pink 5
June 19, 2013: Emlor C 7 vs Shalimar 9 (Quarter-Finals)
June 21, 2013: Lost Boys 5 vs Shalimar 9 (Semi-Finals)
June 23, 2013: Shalimar 8 vs Ferne Park 9 (Final)

Author adminPosted on October 28, 2014October 28, 2014
Will Google debut Nexus 6 in time for Halloween? This has been suggested in several tech articles claiming to have the confirmed date for...
Read More

Author adminPosted on February 13, 2013
Does Montreal Fashion Week get more exciting than this? Will Smith showed up at the Arsenal Tuesday night for the Ralph Leroy show, and...
Read More
In-Sync
Author syncmagPosted on January 16, 2013January 17, 2013
The world hasn’t ended It was supposed to end this last Friday on December 21 according to that Mayan prophecy but the world decided...
Read More
In-Sync
Author syncmagPosted on March 18, 2013April 11, 2013
Victims of sex abuse by priests protest in Montreal They say now is the time for Cardinal Marc Ouellet to address the problem Several...
Read More

Author adminPosted on January 14, 2015January 14, 2015
PARIS: Notorious French comedian Dieudonne was arrested Wednesday for being an “apologist for terrorism” after writing a Facebook comment suggesting he sympathised with one...
Read More