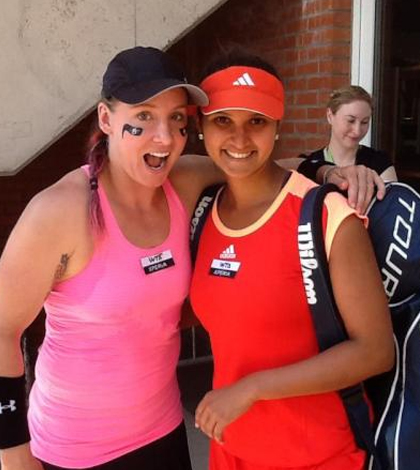 MIAMI: Sania Mirza kept the Indian hopesalive by progressing to the women’s doubles quarterfinals even as country’s challenge ended in the men’s doubles with the defeat of Rohan Bopanna and his partner Rajeev Ram in the second round of ATP-WTA Sony Open.
Sania and her American partner Bethanie Mattek-Sands overcame a fighting pair of Jarmila Gajdosova and Sabine Lisicki 6-1, 3-6, 10-7 in the second round.
They will now fight it out with Sara Errani andRoberta Vinci for a place in the semifinals.
In the men’s doubles second round, unseeded Bopanna and Ram were knocked out by formidable second-seeded pair of Marcel Granollers and Marc Lopez 6-4, 7-6(5).
Somdev Devvarman was floored by world number one Novak Djokovic in the men’s singles while Leander Paes and Mahesh Bhupathi had exited from the doubles after suffering second-round defeats with their respective partners.