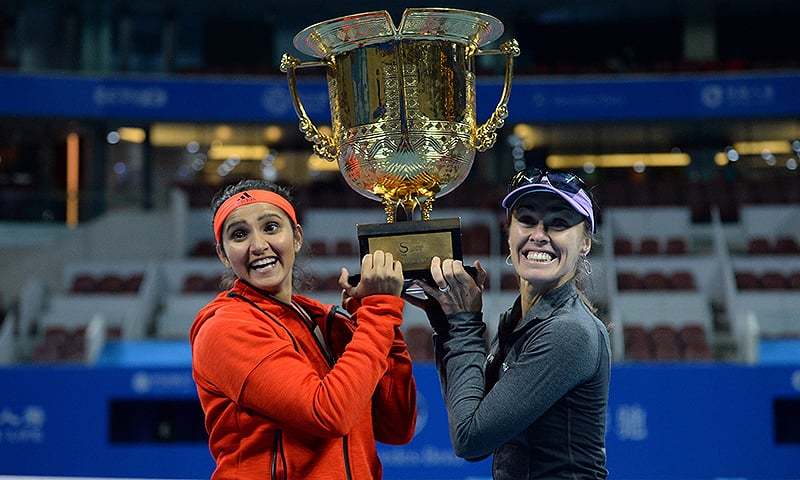 BEIJING: India’s doubles world number one Sania Mirza has promised to take a measured approach to next year’s Olympics, promising “I’m not going to kill myself!” if she fails to bring home a gold medal.

Excitement over the Rio de Janeiro Games is already ramping up with high speculation over who will team up with Mirza as she seeks to win a rare Olympic gold for India.

Mirza and her new partner Martina Hingis have cut a swathe through the doubles circuit this year, winning Wimbledon and the US Open among eight titles altogether including the China Open on Saturday.

The 28-year-old said it would be “amazing” to win Olympic gold, but also stressed that it wasn’t the only target in a sport which has four Grand Slam tournaments every year.

“It would be amazing. As players we do want that, but we also have four Slams a year,” she told AFP in interview at the China Open in Beijing.

“So it’s not like a lot of other sports where they get one opportunity every four years — we kind of get opportunities every four months.

“So it would be amazing, it would feel like probably I’ve won everything then if I win that Olympic medal. But if I don’t, I’m not going to kill myself.

India’s Olympic successes have been few and far between, with only one non-team gold medal so far at any of the Summer Games — going to bespectacled shooter Abhinav Bindra at Beijing 2008.

Victory in Rio would push India’s Mirza-mania to fever pitch, but the player herself did her best to dampen growing expectations.

“People kind of expect that if you don’t have that medal, you’re depressed. It’s not like that,” she said.

“The last time, I remember we played the Olympics and before people left the Olympic village we were already competing in another tournament.”

Mirza said it was too early to decide whether Leander Paes — who won singles bronze at the 1996 Atlanta Games — or Rohan Bopanna would get the nod for mixed doubles, India’s best chance of success.

“Rohan’s been playing really well obviously and Leander’s won some mixed (doubles) this year,” she said.

“In a tennis player’s life, eight months is a long time so we’ll just take a call closer to the event. All I can say is that hopefully the best team will be put forward.”

It is perhaps a shame that Hingis, a five-time Grand Slam singles winner, isn’t Indian after the two found a magic formula which has now won them 18 matches in a row.

“There is no secret — we just try to play our best every time we step on the court,” Mirza said.

“We’ve become very good friends. We’ve gotten to know each other and I think that chemistry off the court helps us on the court as well,” she added.

But whatever happens next year, Mirza’s successful transition from injury-hit singles player to serial doubles winner has already done great things for tennis in India.

“Being number one in the world at something you do, everyone’s like ‘Oh my God!’… Not just to have a number one but to have a woman, all those things go with it,” she said.

“So it’s been good, tennis is on the front pages all the time… and I really do hope this does inspire a lot of young kids to pick up tennis racquets and not just cricket bats.”