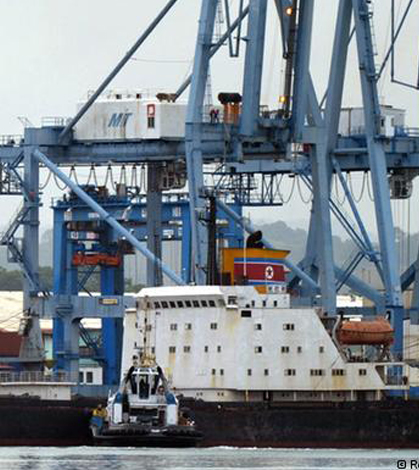 Cuba has admitted being behind a stash of weapons found on board a North Korean ship seized in the Panama Canal.

The Cuban foreign ministry said the ship was carrying obsolete Soviet-era arms from Cuba for repair in North Korea.
The ship was seized by Panama last week after “undeclared military cargo” was found hidden in a shipment of sugar.
United Nations sanctions prohibit the supply of arms to North Korea in the dispute over its nuclear program.
A Cuban foreign ministry statement said Cuba reaffirmed its commitment to “peace, disarmament, including nuclear disarmament, and respect for international law”.
It said the vessel was carrying 240 tonnes of obsolete defensive weapons – two anti-aircraft missile complexes, nine missiles in parts and spares, two MiG-21bis fighter planes and 15 MiG engines.
The Cuban statement said they were all made in the mid-20th Century and were to be repaired and returned to Cuba.
“The agreements subscribed by Cuba in this field are supported by the need to maintain our defensive capacity in order to preserve national sovereignty,” the statement went on.
Cuba said the ship’s main cargo was 10,000 tonnes of sugar.

‘Historical ties’
North Korea and Cuba are both nominally communist states and are known to have relatively close relations. A high-level military delegation from North Korea visited at the end of June and was received by President Raul Castro.
Cuban media said they discussed “the historical ties that unite the two nations and the common will to continue strengthening them”.
Announcing the seizure of the vessel on Tuesday, Panamanian President Ricardo Martinelli said it contained suspected “sophisticated missile equipment”.
He posted on his Twitter account an image of a large green object inside a cargo container.
The president said the 35-strong crew had resisted the search and the captain had tried to kill himself.

Panama’s Security Minister Jose Raul Mulino said the UN would be sending experts to continue the investigation and examine the issue of charging the crew with illegal weapons smuggling.
The US “commended” Panama for its actions, and said it strongly supported a full inspection of the ship.
The vessel, the Chong Chon Gang, was stopped near Manzanillo on the Atlantic side of the canal last week.
It had left Russia’s far east in April and travelled across the Pacific Ocean before entering the canal at the start of June, with Cuba as its stated destination.
The Chong Chon Gang had crossed the Pacific without its automatic tracking system switched on a move described by the BBC’s security correspondent Frank Gardner as highly suspicious.