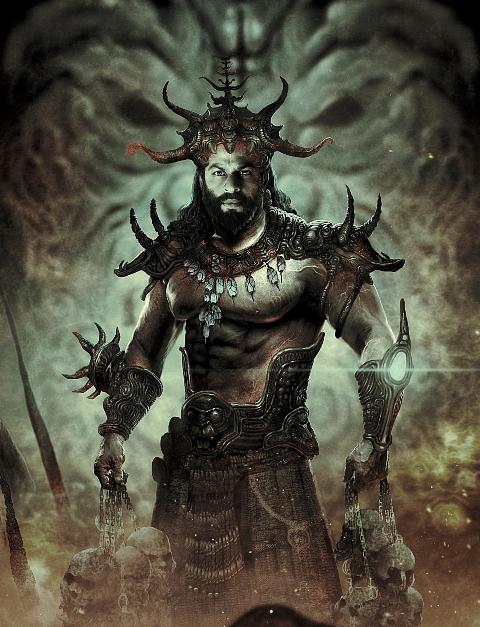 King Khan, who never stops re-inventing his persona for the millions of fans he has worldwide is back again, with a completely novel avatar. The animated movie “Avartha- The Origin” is an animated adaptation of the graphic novel titled by the same name. This is his first ever role in an animated movie.

The official trailer features SRK in a dark, strong, rippled muscular physique coupled with heavy Armour, coupled with a somber expression on his face. There are also horns on his head and some archaic weapon in his hand.

The overall look and feel of the trailer is very reminiscent Of Beowolf, and there appears to be a dragon-like creature in the background. The background sequence and the thrilling first few seconds of this trailer suggest that it is regarding the adventure of a lone warrior.

Atharva is a novel which is set in a mythological setting where the hero covers a long, difficult journey to an adventurous, magical land where he encounters strange beasts and phenomenon. The story seems like an age-old tale however the visuals are very fluid and gripping, and fans seems to be loving their hero in this new get-up.

Shah Rukh Khan's "Atharva – The Origin" – A New… by BollywoodNow

This is why SRK is known as King of Bollywood!

Author adminPosted on April 22, 2013May 6, 2013
Bollywood superstar Shah Rukh Khan is nursing a shoulder injury that he suffered on the sets of his upcoming film Chennai Express but that...
Read More

Author syncmagPosted on January 24, 2013January 24, 2013
Offbeat cinema turned out to be the toast of the season with Paan Singh Tomar and Barfi! sharing the best film title, and its...
Read More

Author adminPosted on January 5, 2016
Arjun Kapoor and Kareen Kapoor have given their fans a New Year treat by showing them a glipmse of their romance and love from...
Read More

Author syncmagPosted on February 14, 2013February 14, 2013
This Valentines Day, Shahrukh Khan and Katrina Kaif will be performing together for the first time in a musical show. This would be their...
Read More

John Abraham: MADRAS CAFE Is Not About Sri Lanka

Author adminPosted on September 12, 2013
From its very poster that has a map of Sri Lanka imprinted on it to the stage and setting that the film carries, one...
Read More