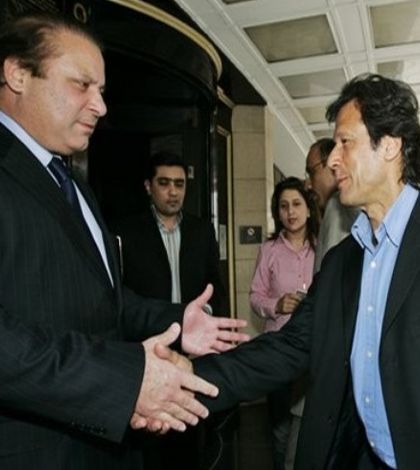 Prime Minister Nawaz Sharif on Wednesday decided to meet opposition leader Imran Khan in an effort to end the anti-government protests here seeking his ouster, as Pakistan’s powerful military called for calm and asked all stakeholders to resolve the impasse through meaningful talks.
“It has been decided PM (Sharif) will meet Imran Khan for the sake of country,” Minister for Railways Khawaja Saad Rafique, a close aide of Prime Minister Sharif, tweeted.
Rafique did not give the time for meeting.
It is hoped that Sharif will offer Khan a full audit of ballots to address his concerns about rigging in last year’s poll which Pakistan Tehreek-e-Insaf party lost.
In the polls, Sharif’s PML-N had won 190 out of 342 seats. Khan’s PTI got 34 seats, the third largest bloc in the legislature.
Khan wants Sharif’s ouster, while Canada-based cleric Tahir-ul Qadri wants to bring a revolution in Pakistan.
Sharif’s decision came after Khan threatened to storm the Prime Minister House if he refuses to step down by today.
“If Nawaz Sharif does not resign then we will enter into the PM House,” Khan said while addressing thousands of anti-government protesters who entered the heavily fortified ‘Red Zone’ and set up camp in front of the Parliament House.
Meanwhile, the military called for calm after protesters breached the Red Zone that houses important government buildings including the Parliament House, Prime Minister House, President House, the Supreme Court besides embassies.
“Situation requires patience, wisdom and sagacity from all stakeholders to resolve prevailing impasse through meaningful dialogue in larger national and public interest,” military spokesman Maj Gen Asim Saleem Bajwa tweeted.
He said the buildings in the red Zone are symbol of state and being protected by army, so the sanctity of these national symbols must be respected.
Earlier, the rallies led by Pakistan Awami Tehreek and Pakistan Tehreek-e-Insaf marched into the Red Zone and set up camp in front of the Parliament House.

US Military Involvement In Syria A ‘Mistake’: Gates

Author syncmagPosted on May 17, 2013May 17, 2013
WASHINGTON - Former US defense secretary Robert Gates warned Sunday that deepening US military involvement in Syria’s civil war would be a “mistake,” warning the...
Read More

Author adminPosted on June 24, 2013
SHAB-E-BARAT is the auspicious night for the Muslims, the night of reverence, fervour and divine blessings is being observed tonight. Shab-e-Baraat, the night of...
Read More

Author adminPosted on June 5, 2013
LONDON: Two Pakistani girls who married each other under new British laws have applied for political asylum in the UK claiming their lives would...
Read More