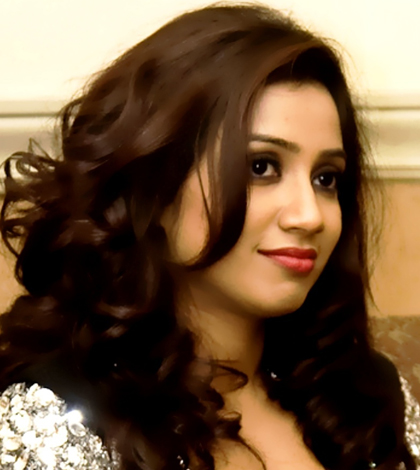 Early Life
Born on March 12, 1984 in Barhempur, West Bengal India Shreya Goshal at the age of 4, accompanied her mom on harmonium, her first Guru. Long before she made her Bollywood playback debut with Devdas in 2002, Shreya Ghoshal had already charmed audiences as a kid on reality show Sa Re Ga Ma (now Sa Re Ga Ma Pa). The exceptionally talented Shreya caught the attention of the judges, and one of them, Kalyanji, convinced her parents to relocate to Mumbai and encourage her to take up playback singing.

She was only 16 when she recorded the first song for Devdas, “Bairi Piya”. According to her, she has not rehearsed so much for a film as that done for Devdas.

“I remember I was asked to rehearse the song once before finally recording it. I simply closed my eyes and sang without a break. When I opened my eyes, I noticed a lot of excitement and chaos outside the recording room. Then Sanjayji told me I had sung the song so well that they had recorded it at one go”, told Shreya.

Devdas helped her in earning national fame. Her songs in Devdas were able to earn her some popular accolades, such as Filmfare Award for Best Female Playback Singer. Possessing a National Award at the age of 18 for her very first song in Bollywood (“Bairi Piya”) was a great achievement.

Extending the Wings of Fame
She was an immediate success and was called by various regional film industries for recording songs in her voice.
The year 2005 heard a lot of songs from Shreya Ghoshal. She came up with hit songs again and again. Ghoshal recorded the song “Agar Tum Mil Jao” which was featured in the album Zeher (2005). The song topped the charts and was also a part of the compilation album Evergreen Romantic Hits. Later on, Shreya came up with the popular romantic track “Piyu Bole” from Parineeta, which was able to win the hearts of millions of Indians. Both “Piyu Bole” and “Agar Tum Mil Jao” were nominated for the Filmfare Award for Best Female Playback Singer. Shreya’s career took a high leap as she received her second National Film Award for Best Female Playback Singer for the song “Dhire Jalna” from Paheli.
In addition to the numerous songs she rendered to Indian films in various languages, she has released many solo studio albums. Her earlier albums are in Bengali language and was released by Sagarika from 1998 to 2006.
About her singing and rehearsing style, she added,

“I have a special way of writing the lyrics when it is dictated to me. No matter what the language of the song, even if it is Bengali, I write it in Hindi. I have certain notations and markings to indicate the way it should be pronounced. I feel the Devanagari script is the closest to the phonetics of the language. English alphabets are not very good for that purpose. Moreover, I listen carefully and try to grasp as much as possible when the lyrics are read to me”.

Shreya Ghoshal Day
– Ghoshal was also honored from the U.S. state of Ohio, wherein Governor Ted Strickland declared June 26 as “Shreya Ghoshal Day”. The very first “Shreya Ghoshal Day” was celebrated on June 26, 2010 with huge pomp and grandeur among her fans on popular micro blogging sites. She was also featured in the Forbes’ Top 100 celebrities of India.

Concerts and Other Activities

From the year 2011, Ghoshal became active in musical concerts all over the world. In 2011, she performed in London, Chicago, Toronto, Houston, New Jersey, California, New York, Washington D.C and many more. In 2013, Shreya performed at various places in Australia and New Zealand.
Later in 2013, Ghoshal made an UK and Europe tour in which she sang at various places in Europe, as a celebration of 100 years of Bollywood. Shreya also performed at the North American Bengali Conference 2013 Concert in Toronto, being the Chief Guest of the grand event.

In 2013, Ghoshal appeared as a judge for Indian Idol Junior Season 1, along with Vishal Dadlaniand Shekhar Ravjiani.
On April 26, 2013, she was honoured at the House of Commons of the United Kingdom in London for her contribution to Indian music. It was declared as one of her highest honours which she received from the elected Member of Parliaments of the House of Commons.
In 2013, Ghoshal became the third Indian to have over 10 million likes in the social networking site Facebook after A. R. Rahman and Sachin Tendulkar, and thereby, the first Indian woman too in this regard.

Author adminPosted on October 23, 2013
Canadian in appearance, Indian in origin, Universal in appeal, Prita Chabbra is a multi-talented artist. For her music is her passion and social work...
Read More
Sync Rendezvous
Author syncmagPosted on March 28, 2013May 17, 2013
On Sunday March 24th, 2013, the organizers of the Montreal Shaadi Show hosted the first ever Wedding Show in Montreal dedicated to the South...
Read More

Author adminPosted on June 25, 2016
It is very rare that someone comes along with just the right amount of personality, the right amount of talent, the charisma, the style,...
Read More
Sync Rendezvous
Author syncmagPosted on March 25, 2013May 17, 2013
Maha Shivratri is a Hindu festival celebrated every year in reverence of Lord Shiva. It is also known as padmarajarathri. Shivaratri literally means the...
Read More

Author adminPosted on June 25, 2016
Canada Strikes Back With The New PM If your actions inspire others to dream more, learn more, do more and become more, you’re a...
Read More