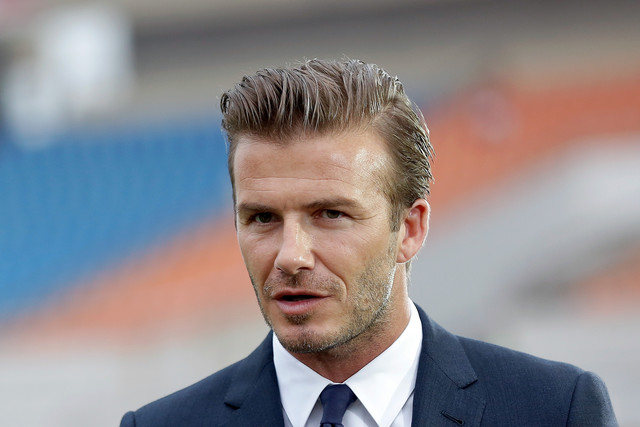 David Beckham wants the world to know that his new deal with Global Brands isn’t just about him.
Along with American idol creator Simon Fuller, the famed footballer signed a 50/50 joint-venture deal with Hong Kong-listed Global Brands Group this week to build brands with high profile sports and entertainment icons around the world.

“We really have to clarify that this project is about me stepping away from personalized products. There might be the odd thing, but it’s about me, Global Brands and Simon Fuller, creating something for other brands, other icons,” he told CNBC on Wednesday.

Bruce Rockowitz, CEO of Global Brands, told CNBC the project is looking into all types of consumer products, with everything from fashion to electronics on the table.

No details were given on potential celebrities that may be added to the roster, but Rockowitz confirmed the list would be short. During a press conference, Beckham jokingly hinted he may have to be friends with any new additions to the label.

The Hong Kong-listed firm lit up trading screens on Thursday, with shares surging as much as 5 percent. The newly-formed company was part of global exporter Li & Fung’s brands and licensing business before being spun off earlier this year.

The deal pits Beckham in competition with some of his long-term sponsorship commitments, including Swedish retailer H&M and Adidas.

“Obviously, we are going to be very hands on as to what brands we go into. It will be about improving those brands, not about competing, even though we want to be the best. Myself, Bruce, Global Brands competing with someone that I’m already involved in, there’s no sense in that – we’ll be very careful,” Beckham said.

“When you talk about David’s endorsements, it doesn’t preclude us doing a deal with one of the people he’s already with and creating a brand together. Everything is on the table,” added Rockowitz.

US vs Asian markets

While the U.S. makes up around 80 percent of Global Brands’ business, focusing on Asia was “a natural choice” for the firm with Beckham in tow.

“He can’t go on the streets without being accosted. I thought it was bad with my wife [Hong Kong singer Coco Lee]. The market doesn’t matter, it’s what you do in that market and there’s so much that we’re planning,” Rockowitz said.

Author syncmagPosted on January 24, 2013January 24, 2013
Foster’s acceptance speech for receiving the lifetime achievement award was forthright and fascinatingly unconventional. The glass closet is that bit emptier today following Jodie...
Read More
Sync Tainment
Author syncmagPosted on March 25, 2013April 11, 2013
Arshad Warsi has done it. In a career lasting decade and a half, he has managed to score his first success as a solo...
Read More