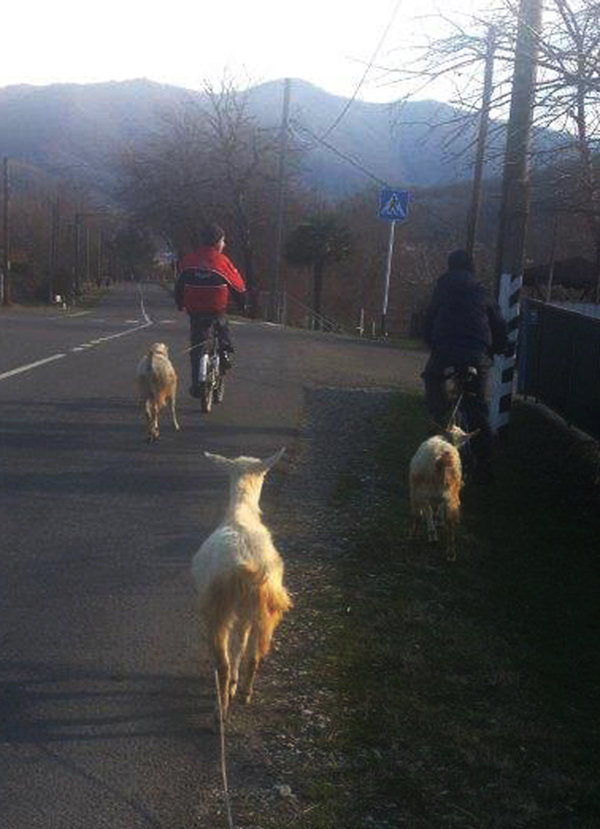 While Vladimir Putin and rich Olympic sponsors watch the Winter Games in gleaming arenas, boys in nearby Bolshoi Kichmai herd their goats by tying them to rickety bicycles, riding against the wind through a rocky valley where invading Russian armies slaughtered their ancestors 150 years ago.

These Circassian boys, their families and neighbors are the real hosts of the Sochi Olympics. Circassians, a Muslim ethnic group native to these lush lands that Putin chose for his hegemonic Olympic project, were massacred and exiled by czarist troops, persecuted under Stalin and largely ignored in the run-up to the Sochi Games.

Members of the Circassian diaspora from New Jersey to Turkey and Israel have protested, arguing that Olympic skiing and other events are being staged on the blood of their forebears. But Circassians who still live in villages sprinkled through the Sochi region are loath to put up a fuss.

The people of Bolshoi Kichmai worry more about securing a long-awaited gas pipeline and paved roads than righting historical wrongs. And they fear that confronting powerful Russian authorities could invite new discrimination against a long-powerless minority.

“We don’t need to throw stones at the past, we need to look forward,” said Aisa Achmizov, who runs the small folk art museum in Bolshoi Kichmai, which he hopes will bring in more visitors thanks to the Olympics. “You have to know the history of your country. But I don’t want to say too much.”

Russia’s most prominent terrorist, Doku Umarov, made matters worse by adopting the Circassians’ cause. In a warning last year, the Chechen rebel leader urged Muslim extremists to target the Games.

Circassians insist they are peaceful and have nothing to do with Umarov’s threat. But it has made the villagers of Bolshoi Kichmai even more wary of speaking out. Activists say Umarov’s threat has provided Russian security services a pretext to increase document checks and pressure on women in headscarves and men with long beards across the Caucasus.

The Circassians are one piece in a patchwork of more than 100 ethnic groups across the Caucasus whose warrior traditions and resistance to outside rule loom large in Russia’s history and collective consciousness. The people of Bolshoi Kichmai are from one of several Circassian groups, the Shapsug.

That diversity contributes to Russia’s cultural wealth — and has posed challenges to Russian rulers ever since they brought the soaring peaks and seashores of the Caucasus region under the imperial yoke.

‘Well, what can we do? It is done. God will be their judge.’
– Khamed Komzh
The conquest ended in the 1860s after decades of scorched-earth warfare, mass killings and expulsions that some label genocide. The Circassians surrendered in 1864 in the city of Sochi, and exiled Circassians scattered across the Caucasus and around the world.

Today, Circassians in New Jersey have a tight-knit community whose congressional representative defends their interests.

Circassians in Jordan are among the country’s elite.

Circassians in Bolshoi Kichmai, by contrast, struggle to get by on tourism in a town with few amenities, just a few dozen kilometres from Olympic events but a world away from their glory.

The toilet at the folk art museum is an outhouse with a hole in the floor. Firewood is the primary fuel for many families. Grandparents fight a losing battle to ensure that the goat-herding boys and other village children speak their native dialect.

And well water is running dry, after a company building railroads for the Olympic project hauled away huge amounts of gravel from the Shakhe river, disrupting its flow through town. Residents filed a lawsuit against the company, but are still waiting for results.

It’s the latest of many ways the Circassians have been wronged.

The No Sochi campaign (www.nosochi2014.com) wants Russian authorities to recognize what happened in 1864 as a genocide, to allow Circassians from around the world to move back to ancestral lands, and an end to de facto quotas for Circassians in local police, government and other positions.

Amid the pressure, regional authorities belatedly acknowledged that the Olympic sites are on what was once Circassian land, and Olympic organizers hastily erected a Circassian House in Olympic Park.

​A mini-museum displays a sanitized version of their history, with iron and bronze tools and embroidered sheepskin robes. An adjacent stage hosts children’s dances and harmonic songs of Circassian love and legend. In each room stands what appears to be a minder from the security services, watching in silence.
The Circassian House falls far short of a national apology. And Putin last week dismissed Circassian protests abroad as a tool in a campaign against Russia’s global influence.

“Efforts to restrain Russia are cropping up here and there, including, unfortunately, efforts to use the Circassian factor as an instrument concerning this Olympic project,” he told a Circassian leader at a community meeting.

Some ethnic Russian visitors at the games reflect their leader’s view.

“In the history of any country there are moments like this,” said Igor Negubailo, a lawyer from the regional capital of Krasnodar. He said he looked online to learn more about the Circassians after hearing the diaspora was protesting the games, but dubbed it a “provocation” and insisted that his Circassian friends don’t share the same concerns.

Few foreigners at the Olympics seem familiar with the Circassians’ story. Athletes from the U.S., Germany, Slovakia and Finland returned puzzled stares when asked about them.

Life in Sochi: From lush resort to Olympic construction site
Olympic security front and centre
Sochi’s opening ceremony likely to ignore Circassian past
Matt Chelap, a sports marketer from Atlanta watching luge races, said, “Coming from the United States and how we treated native Americans, I guess I’m not surprised by it. But it is sad to hear indigenous people were taken out of it.”

Circassian spectators are hard to find. Bolshoi Kichmai’s residents are leading their lives as if the Olympics weren’t happening just a few valleys away.

Beekeeper Khamed Komzh shrugs when asked about how history has treated his people.

“Well, what can we do? It is done. God will be their judge.”

Author syncmagPosted on May 6, 2013May 7, 2013
Romance is an everlasting element of Bollywood love stories, but love has no boundaries. Our B’town celebs, who romanced each other on reel turned...
Read More