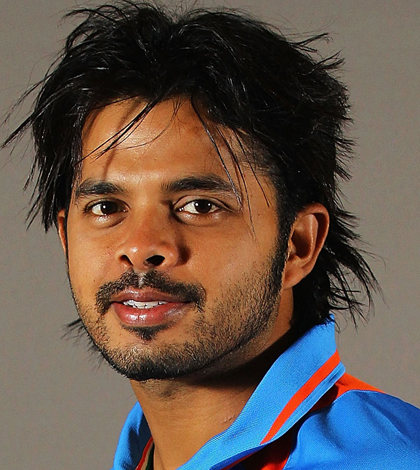 Former India fast bowler Shanthakumaran Sreesanth has been banned for life on spot-fixing charges, the Board of Control for Cricket in India (BCCI) said on Friday.

Sreesanth and two other players were arrested in May by Delhi police on suspicion of spot-fixing in the cash-rich Indian Premier League Twenty20 tournament.

The BCCI immediately suspended Sreesanth and Ankeet Chavan and Ajit Chandila, team mates in the IPL franchise Rajasthan Royals, and subsequently launched its own investigation.

“Mr. S. Sreesanth is banned for life from playing any representative cricket, or in any way being associated with the activities of the BCCI or its affiliates,” the BCCI said in a statement after its disciplinary committee meeting in Delhi.

Police charged the three bowlers of taking money to concede a pre-determined number of runs in three different IPL matches.

Chavan was also banned for life by the BCCI while there was no ruling on Chandila. Domestic cricketers Amit Singh and Siddharth Trivedi were banned for five years and one year respectively, the board added.

Sreesanth has played 27 tests and 53 one-day internationals but injuries and disciplinary issues have kept him out of the Indian side since late 2011.

Spot-fixing involves the manipulation of individual incidents within a match which may not affect the outcome of the contest.

Pakistan players Salman Butt, Mohammad Asif and Mohammad Amir were jailed in Britain for their role in a spot-fixing scandal exposed in the 2010 Lord’s test against England.

Author adminPosted on May 6, 2013May 6, 2013
Sachin Tendulkar celebrated his 40th birthday on Wednesday, 24 April with a nation of cricket fans willing the man they affectionately call “The Little...
Read More
Sync Sports
Author syncmagPosted on March 15, 2013April 11, 2013
Margaret Purdy of Strathroy, Ont., and Michael Marinaro of Sarnia, Ont., won the silver medal in pairs on Thursday at the world junior figure...
Read More