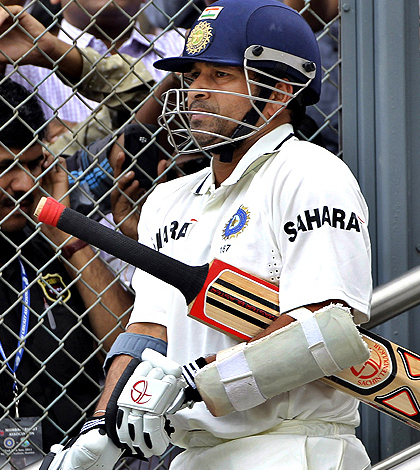 NEW DELHI: India’s record-breaking batsman Sachin Tendulkar announced Thursday that he would retire after playing his 200th Test match next month, calling time on a career stretching nearly a quarter of a century.
Tendulkar – a genius without peer | ‘We could sense he was special’
Tendulkar, the highest run-scorer in Test cricket history and the only player to make 100 centuries in international cricket, said he had been “living a dream” since making his debut in 1989 but recognised it was now time to call it quits.
“It’s been a huge honour to have represented my country and played all over the world,” the batsman said in a statement.
“I look forward to playing my 200th Test Match on home soil, as I call it a day.”
India is to play a two-Test series against the West Indies next month which would enable Tendulkar, who has already made 198 appearances, to become the first player to reach the 200 landmark.
Tendulkar, 40, said he found it hard to imagine life without cricket “because it’s all I have ever done since I was 11 years old.”
“All my life, I have had a dream of playing cricket for India. I have been living this dream every day for the last 24 years,” he said.
The right-handed batsman has scored 15,837 runs since his debut against Pakistan in Karachi in November 1989, although he has struggled for form in recent times. His 100 centuries in international cricket includes 51 Test tons.
His last Test match century came in January 2011 when India played South Africa and he retired from One-Day internationals late last year.
He also played his last Twenty20 match earlier this month in an appearance for the Mumbai Indians.
Tendulkar captained India for several years but the high point of his career came in 2011 when he was part of the Indian team to win the World Cup.
He was carried from the field by his team-mates after the final in his hometown of Mumbai.
Known as the ‘Little Master’, Tendulkar has been widely hailed by his contemporaries as second only to the Australian legend Sir Donald Bradman in the pantheon of batting greats.
Australia’s Shane Warne, who was considered one of his generation’s finest spinners along with Sri Lanka’s Muttiah Muralitharan, said that no one else came close to Tendulkar in his prime. “Sachin Tendulkar is, in my time, the best player without a doubt — daylight second, Brian Lara third,” said Warne.
Tendulkar, who is an honourary member of parliament, has sometimes struggled to cope with his iconic status, but he made a point of praising his fans in his retirement statement.
“Most of all, I thank my fans and well-wishers who through their prayers and wishes have given me the strength to go out and perform at my best,” he said.
Tendulkar first hit the headlines as a 14-year-old when he shared a then world record partnership of 664 runs in a school match with Vinod Kambli, who would also go on to play for India.
Legendary Indian opener Sunil Gavaskar once said he was convinced Tendulkar would achieve greatness when he first saw him bat in the nets more than two decades ago.
“It is hard to imagine any player in the history of the game who combines classical technique with raw aggression like the little champion does. There is not a single shot he cannot play,” said Gavaskar.

Author adminPosted on September 23, 2013
Former India fast bowler Shanthakumaran Sreesanth has been banned for life on spot-fixing charges, the Board of Control for Cricket in India (BCCI) said...
Read More

Author adminPosted on August 5, 2013August 5, 2013
GROS ISLET: Regret more than relief characterises the mood of both the West Indies and Pakistan squads heading into the fourth One-Day International at...
Read More