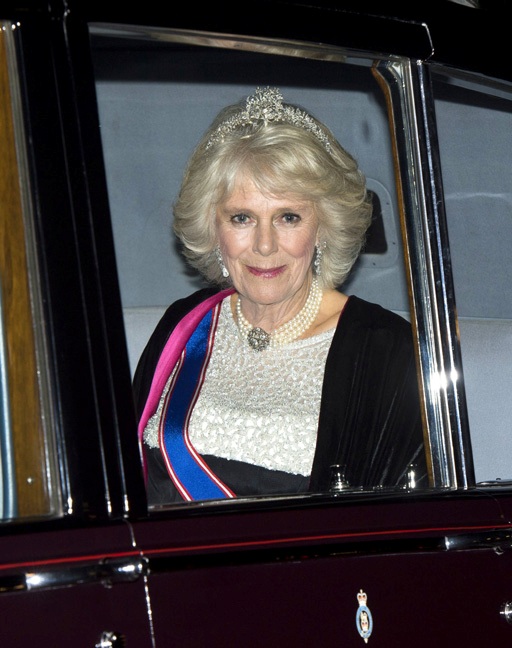 The Duchess of Cornwall dazzled in a stunning diamond-encrusted tiara at a Buckingham Palace ball on Tuesday evening. Royal watchers believe that the Duchess’ sparkling headpiece was her family’s Cubitt-Shand tiara – the same one worn by Camilla to her first wedding to Andrew Parker Bowles in 1973.

Her daughter, Laura, also wore the family jewellery at her 2006 wedding to Harry Lopes.

Camilla teamed the tiara – understood to be a legacy of the Duchess’ maternal grandmother Sonia Rosemary Cubitt, Baroness Ashcombe – with diamond earrings and a four-string pearl necklace at the reception for members of the diplomatic corps.

The Queen and the Duke of Edinburgh were the hosts of the evening, according to the Royal Diary.

Camilla was pictured arriving at the Palace alongside Prince Charles, who was dressed in a suit with medals adorning his jacket.

Earlier on Tuesday, the Prince of Wales made royal history by opening a new academy aimed at inspiring the broadcasters of tomorrow, by unveiling an electronic plaque.

He launched the Sky Academy Careers Lab at the west London campus of the broadcaster Sky in Osterley.

The electronic plaque appeared on a screen seconds after the heir to the throne, who was joined by his wife, touched a tablet screen.

During their tour of the campus, the Duchess could not resist trying her hand at controlling the robot cameras when the pair visited the Sky Sports News HQ studio.

The royal couple split up to watch groups of children working in mini news studios with the pupils acting as cameramen, presenters, directors and producers.

In another part of the campus the Duchess was shown an interactive wall that featured scenes from various departments at Sky.

Sync Tainment
Author syncmagPosted on March 19, 2013April 11, 2013
CHRISTOPHER Maloney has finally opened up about his sexuality – admitting he is gay. Asked straight out if he was homosexual, the X Factor...
Read More

Humayun Saeed Has Big Plans For 2016.

Author adminPosted on January 5, 2016January 5, 2016
2015 was undoubtedly a stellar year for Humayun Saeed. He proved his indisputable star power at the box office with two major blockbusters –...
Read More