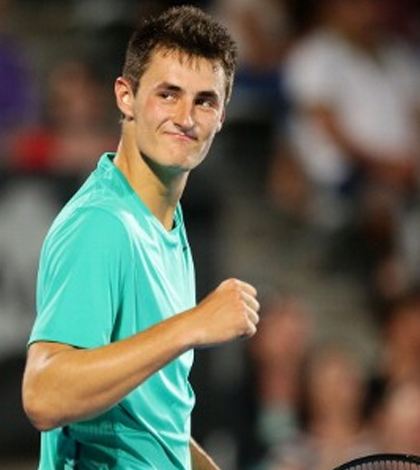 WARSAW: Australia are back in the Davis Cup World Group for the first time in six years, with Bernard Tomic supplying the crucial third point against Poland with a 6-4, 7-6 (7-5), 6-3 win over Lukasz Kubot on Sunday.
That victory gave Pat Rafter’s team an unassailable 3-1 lead in the best-of-five World Group playoff tie on clay.
Tomic, often the bad boy of Australian tennis, won his second singles match of the tie after he and Lleyton Hewitt gave Australia a 2-0 lead on the opening day with straight sets wins.
Poland kept the tie alive as Marcin Matkowski and Mariusz Fyrstenberg defeated teenage debutant Nick Kyrgios and Chris Guccione in Saturday’s doubles, before Tomic completed the job in impressive fashion.
The victory means Australia, 28-times Davis Cup champions, will return to the top 16 next year for the first time since 2007.
They had reached the World Group playoffs for the past three years, only to fall at the last hurdle.

Author adminPosted on May 13, 2013
ALASTAIR COOK will have Essex pal Ravi Bopara alongside him as he looks to guide England to their first ever 50-over international trophy this...
Read More

‘Our Batsmen Should Perform Their Roles’

Author adminPosted on June 18, 2013
BIRMINGHAM: Faced with a do-or-die situation, Misbah-ul-Haq urged his misfiring batsmen to focus on playing roles given to them instead of expecting others to...
Read More