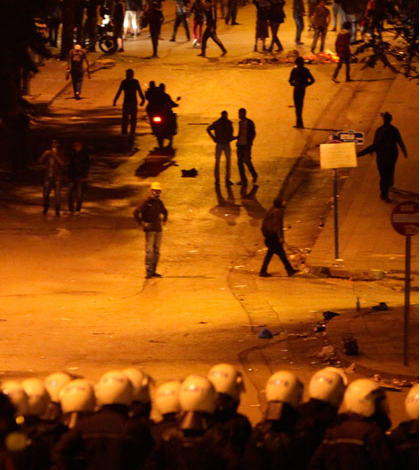 As tens of thousands held noisy demos on Sunday in Istanbul, the capital Ankara and the western city of Izmir, Erdogan went on the offensive, firing up loyalists of his ruling Justice and Development Party (AKP) with rallies of his own across three cities.
“We remained patient, we are still patient but there’s a limit to our patience,” Erdogan told thousands of cheering AKP supporters in Ankara on a 10th day of unrest.
“Those who do not respect this nation’s party in power will pay a price,”he added, before ending his final rally with a fireworks display.
His fans relished the show of strength, frequently interrupting his outdoor speeches with bursts of applause and chanting: “Turkey is proud of you”.
While Erdogan was speaking, police used tear gas and water cannon to disperse thousands of anti-government protesters in the city’s downtown Kizilay square, the second clashes there in two days. At least two people were injured, an AFP photographer saw.
The nationwide unrest first erupted on May 31 with a tough police crackdown on a campaign to save Istanbul’s Gezi Park from demolition. The trouble spiralled into a mass outpouring of anger against Erdogan and his party, seen as increasingly authoritarian.
More than 4,000 demonstrators, many of whom are young and middle-class, have been injured and three people have died in the nationwide unrest so far, tarnishing Turkey’s image as a model of Islamic democracy.
Earlier on Sunday, Erdogan visited the southern port of Mersin and nearby Adana, urging roaring, flag-waving loyalists to respond to the demonstrators by voting for the AKP in next year’s local polls. “I want you to teach them a first lesson through democratic means at the ballot box.
”European Union foreign policy chief Catherine Ashton meanwhile called for “a quick solution” to the unrest, urging “restraint on all sides”.
The government said on Saturday that the protests were “under control”, but hours later some of the largest crowds yet packed Istanbul’s Taksim Square, the epicentre of the demos, with people peacefully singing and dancing through the night.
Taksim, which has seen no police presence since officers pulled out last weekend, was again teeming with people Sunday, many chanting: “Erdogan, resign!””Erdogan was very aggressive today,” said 25-year-old student Onur Alptekin as he left the protest square in the evening. “He looks worried. He’s like a lion in a corner.”
In a fresh bid to calm the turmoil, the man who ordered the initial police crackdown, the governor of Istanbul Huseyin Avni Mutlu, apologised on Twitter and said he wished he was with the protesters camping out on Taksim Square.
“I salute the young people of this country who chose to sleep on the square under the stars instead of in their warm beds.
”Deputy Prime Minister Huseyin Celik on Saturday dismissed any talk of calling early elections to resolve the crisis. “You don’t decide on early elections because people are marching on the streets,” he told reporters in Istanbul.
Erdogan has faced international condemnation for his handling of the unrest in Turkey, a Nato member and key strategic partner in the region for the United States and other Western allies.
The national doctors’ union says the unrest has left two protesters and a policeman dead while almost 4,800 people have been injured across Turkey.
Erdogan added Sunday that over 600 police officers have been hurt in the clashes.
Critics accuse the assertive leader, in power since 2002, of forcing conservative Islamic values on Turkey, a mainly Muslim but staunchly secular nation, and of pushing big urban development projects at the expense of local residents.
Opposition to Turkey’s leader is intense, but his AKP party has won three elections in a row, having presided over strong economic growth.
Turkey will hold both local and presidential elections next year. The AKP plans to launch its first campaign rallies in Ankara and Istanbul next weekend.

Separate Karachi From Pakistan If You Hate Our Mandate, Altaf To ‘Establishment’

Author adminPosted on May 15, 2018December 11, 2018
Margot Kidder, who catapulted to Hollywood fame in the late ’70s as Lois Lane in the “Superman” movies, has died, according to the Montana...
Read More
In-Sync
Author adminPosted on April 17, 2013May 7, 2013
LAHORE: Former Punjab Chief Minister Shahbaz Sharif claimed on Sunday there was a coordinated effort to keep him and his brother out of parliament...
Read More

Soccer And Milkshakes: Exotic Priyanka Is A Hit In Hollywood

Author adminPosted on August 21, 2013
It may not be the most profound ditty in the world but Bollywood actress Priyanka Chopra’s second single Exotic featuring international rapper Pitbull is...
Read More

US Military Involvement In Syria A ‘Mistake’: Gates

Author syncmagPosted on May 17, 2013May 17, 2013
WASHINGTON - Former US defense secretary Robert Gates warned Sunday that deepening US military involvement in Syria’s civil war would be a “mistake,” warning the...
Read More