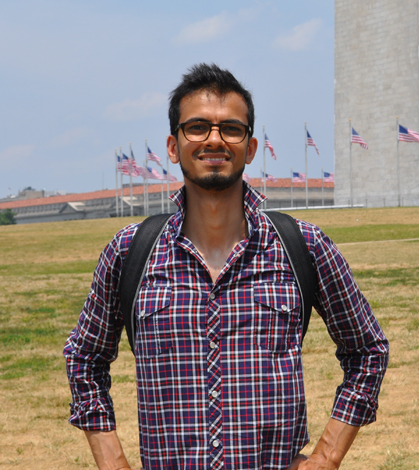 Men make history and not the other way around. In periods where there is no leadership, society stands still.

Sameer Zuberi, was born in Montreal to a multicultural white-Pakistani family. Zuberi has experience working in a variety of fields including legal research, education, public relations, human rights and the Canadian Reserves. He is a tireless bridge-builder between minority communities and Montrealers-at-large.
Let’s talk with Sameer Zuberi!

• Please give our readers a brief introduction of yourself
I was born in Montreal, raised in Laval, and am the eldest of six children. My family is diverse in a number of ways. My mother has Scottish-Italian roots and my father immigrated from Pakistani in the 70s. Also, our extended family has Jews, Christians and Muslims. As a result of my multi-cultural background, tolerance and acceptance has been a major part of my life.
Today, at 33, I have a family of my own. My wife and I have been living in Pierrefonds for the last five years. We have a three-year-old daughter and are expecting our second girl this August.

For the last ten years, I have been involved in advocacy work. The bulk has been around human rights and building bridges within our society. I feel strongly that we need to have a positive discourse on minorities. This starts with highlighting the contributions cultural communities make to the social fabric of our province and country.

• We would like to know about your educational background
For elementary and high school, I was in the public system. Upon finishing high school with honors, I went to Marianopolis College. Later, I entered Mathematics at Concordia, initially with the idea of becoming an actuary. However, during my Concordia experience, I became involved in a number of humanitarian causes, which lead me to pursue the path I’m on today. Currently, I’m back in school to upgrade qualifications and am in my final year of law at Université de Québec à Montréal.

• Would you like to tell us something about the Project Montreal Party?
Projet Montréal is a party that puts people first. With 13 elected members, including three on Montreal’s executive committee, and the administration of two boroughs, Projet Montréal promotes good governance, integrity, urban planning, sustainable transport, economic development and cultural vitality. Our platform is ambitious, but realistic.

• What makes the Project Montreal different from other parties?
The key difference, which sets Projet Montréal apart from the other municipal parties, is that we have never been named in the Charbonneau Commission into corruption. In the current context, corruption is the number one issue. And Projet’s track record as being the only clean team speaks volumes about the party and who is in it.

• What is your mandate regarding The Project Montreal?
I am running for the City Councilor in the district of Pierrefonds-Roxboro East, the area between highway 13 and boul. St. Jean. My mandate will be to represent all residents of the district both at Borough Council and at City Hall.
With expertise in human rights and track-record with Montreal’s cultural communities, I provide a unique and enriching contribution.

• When have you joined the Project Montreal Team and what urges you to join politics and why The Project Montreal?
I joined the Projet Montréal because I the team was made up of good people. The fact that Projet Montréal has never been named at the Charbonneau Commission was a critical point. I don’t think I could have brought myself to join a team that had ethical question marks around it.

When it comes to why I decided to run for office today, the first and foremost reason is that I want to work for, and contribute to, our society-at-large. I believe that I have unique qualifications which are an asset for the whole of our society. For me, public service is a way of life.

I also chose to run today in my home district because I believe this race is wholly
winnable. In the last election Projet Montréal came in second in
Pierrefonds-Roxboro. Given the current context of the Charbonneau Commission, Projet
Montréal is the natural choice for voters wanting real change.

• What was your dream to accomplish and have you achieved it?
Twelve years ago, when I was at Concordia, I made a personal promise – that I’d work for the betterment of our society. And I’m happy to say that I’ve kept that promise. Since my time at Concordia, I have made working for our society a way of life.

• Which factor in your professional life keeps you motivated?
The fact that I always try to tie in my work, to making a positive contribution to our society, keeps me going. If I didn’t feel my work made a difference, I’d have left it long ago.

• You have worked in various fields like law, media relations and human rights, what
has remained your best experience?
Like many others, to have a little pocket money, I started working at a young age. I had my first summer job at the age of 13, working as a caddy, carrying golf bags. Between the ages of 17 to 22, I served in the Canadian reserves. This allowed me to do relief work around the 1998 Ice Storm and the Y2K scare. During my university years, I worked at the Concordia Student Union, which led to a passion for human rights advocacy and bettering our society. It was in the student union that I realized that every person can make a real change, to better the world we live in.
Upon completing university I travelled overseas to teach English in an elementary school. I then secured a job closer to home, in Ottawa, in human rights and media relations. After settling down with my wife, we decided to live in Montreal, as both our families were in the area. It was then, with the support and encouragement of my wife, that I started my legal education and work as a legal researcher.

Of all my experience, I have to say human rights advocacy has been most rewarding.
It’s hard to compare the feeling of helping someone in need, being able to answer a
call, when no one else can.

I’ve handled over a hundred human rights files. Despite the fact that I’ve worked on
some high profile cases, including assisting torture victims, publicity or not,
cases where I make a concrete impact remain most rewarding.

• Would you like to share any incident from your personal life that you can never
forget, with our readers?
In 2002 I was involved in a campaign to assist 1000 non-status Algerians refugees. They had been accepted into Canada because their native land was war torn. However, in 2002, the federal government deemed Algeria safe and was ready to deport the 1000 Montreal Algerians.

The issue was that these people had lived in Canada for years, started lives here, had children, and contributed to our society. Along with a group of other concerned citizens, we pressed for the government to allow for the Montreal Algerians a chance at being regularized, if they met immigration standards.

From the government’s perspective, giving the 1000 non-status Algerians a chance at regularization made sense too, since they lived here, knew our society and could easily integrate.

At the end, 900 of the 1000 qualified to stay in Quebec and Canada. This was a huge victory and ended up being a win-win situation. It’s something I’m very proud of being a part of.

Author adminPosted on July 28, 2017September 13, 2017
This is a curse believed to be done by a person when they are unaware, a knowledgeable or your situation. This is widely among...
Read More

Author syncmagPosted on May 6, 2013May 17, 2013
The Bilz (comprising Master-D and Vicious) & Kashif are a Canadian trio to be reckoned with on a global scale. There is very interesting...
Read More

Author adminPosted on November 5, 2013November 5, 2013
Mrs. Mary Deros, first elected in 1998 as City Councilor for the district of Park Extension in the City of Montreal, was the first...
Read More