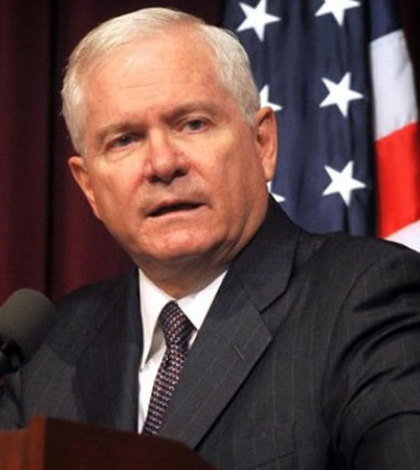 WASHINGTON - Former US defense secretary Robert Gates warned Sunday that deepening US military involvement in Syria’s civil war would be a “mistake,” warning the outcome would be unpredictable and messy.

In an interview with CBS’s “Face the Nation,” Gates also said he saw “no good outcomes” in dealing with Iran’s nuclear program and warned that a full US withdrawal from Afghanistan would be “a disastrous mistake.”
Gates’ comments on Syria come amid debate in Washington over whether to step up military support for rebels fighting the regime of President Bashar al-Assad, even as the administration attempts a new peace initiative with Russia. “I thought it was a mistake in Libya, and I think it is a mistake in Syria, even if we had intervened more significantly in Syria a year ago or six months ago.
We overestimate our ability to determine outcomes.
“Caution, particularly in terms of arming these groups and in terms of US military involvement, is in order,” he said.
“Anybody who says, ‘It’s going to be clean. It’s going to be neat. You can establish safe zones, and it’ll be just swell,’ well, most wars aren’t that way,” he said.
Gates, who served under both George W Bush and President Barack Obama, was US defense secretary in 2011 when the United States joined a NATO-led air operation in Libya that helped rebels topple Libyan leader Moamer Gaddafi.
On Iran, Gates said the best the United States can hope for is that sanctions bite deep enough that the regime decides to change course.
“If there is no military attack, and they don’t change their policies, you will probably see a nuclear-armed Iran igniting a nuclear arms race in the most volatile part of the world, emboldened to be even more aggressive and with missiles that can reach Israel now and Europe soon.
“But if you do hit them, then I think the consequences of their retaliation could spin out of control,” he said.
Gates, a former intelligence officer who helped oversee US support for Afghan insurgents fighting the Soviet Union in the 1980s, said a residual US force should remain in the country after 2014, when US troops are scheduled to come home.
“I will tell you this: For us to leave lock, stock, and barrel at the end of 2014, and abandon Afghanistan as we did after the Soviets left, would be a disastrous mistake.”

Author adminPosted on November 18, 2015
MANILA: US President Barack Obama took time off at an Asia-Pacific summit on Wednesday for an unusual task – putting questions to Chinese internet...
Read More

Author syncmagPosted on February 4, 2013February 4, 2013
The latest buzz is that Rockstar babe Nargis Fakhri and Dhoom boy Uday Chopra are to set to get married this year. The rumour...
Read More
In-Sync
Author syncmagPosted on March 25, 2013April 11, 2013
LAHORE: GATHERING of the Pakistan Tehreek-e-Insaf (PTI) at Minar-e-Pakistan on March 23 may not only help it regain its lost ground it had attained...
Read More