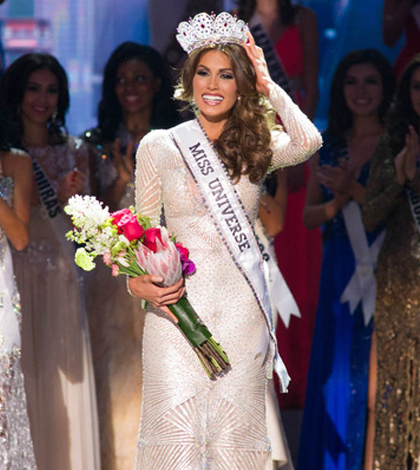 A 25-year-old Venezuelan who appears on TV in her country and is an accomplished flamenco dancer is the new Miss Universe.
Gabriela Isler was crowned Saturday night in the pageant at a sprawling exhibition hall on Moscow’s outskirts.
In the excitement just after the announcement, the tiara fell off Isler’s head as she was being crowned by Miss Universe 2012, Olivia Culpo of the United States. Isler caught the crown laughing.
• Isler’s triumph was the seventh Miss Universe win for Venezuela
• She bested 86 contestants to take the title
Patricia Rodrigues of Spain was the runner-up.
The panel of judges was led by American rock musician Steven Tyler.
Venezuelan President Nicolas Maduro congratulated Isler on Twitter, calling her title a “triumph” for Venezuela, a country that has now won three of the last six Miss Universe pageants.
In fact, Venezuela has won more major international beauty competitions than any other nation, and beauty pageants rank alongside baseball as the country’s most-followed diversion, one that transcends social class and normally insurmountable political divisions.
A whole industry of grooming schools, plastic surgeons and beauty salons has emerged to prepare young women for the thousands of pageants that take place each year around the country in schools, army barracks and even prisons.
Venezuela has managed to keep its beauty queen industry flourishing, despite economic problems have worsened in recent weeks as inflation touched a two-decade high of 54 percent and shortages of basic goods like toiled paper and milk have worsened.

Author adminPosted on January 5, 2016
Arjun Kapoor and Kareen Kapoor have given their fans a New Year treat by showing them a glipmse of their romance and love from...
Read More

Sunjay Kapur accuses Karisma Kapoor of marrying him for money