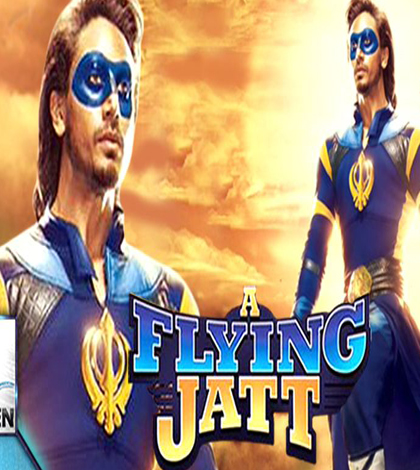 Story: Aman fears heights, dogs and industrialist Malhotra who sends merciless Raka to grab Aman’s land – but what happens when Aman discovers his own superhuman powers? Can he defeat Raka – and the power behind him?

Review: So, straight away, the best thing about A Flying Jatt is the fumbling Jatt played by Tiger Shroff. Wicked industrialist Malhotra (Kay Kay) wants Aman’s family’s lands, which hold a sacred tree, for his polluting industries. Aman’s mother, Mrs. Dhillon (Amrita), ferociously opposes
Malhotra – but Aman quakes before him, intimidated by most things on earth, including his own martial arts
students.
Can Aman ever stand up to Malhotra and his huge henchman Raka (Nathan) – and can he fight his own fears?
Tiger does a neat job as Aman, shivering superhero who fights crime but also buys ‘do kilo lauki’ on the way home. Tiger’s evolution, from a kind but confused kid on the block, to a focused and fierce fighter, comes across well as do the film’s light moments, including Aman as ‘Sunny Leone’. Amrita Singh, literally playing a Tiger Mom, displays feisty panache, berating her son for having ‘doleshole,
no jigra’, delivering wisdom with slaps and guzzling drinks galore. The banter between her, Tiger and Aman’s fun-loving brother Rohit (Gaurav) is fresh good fun.
Sadly, as Aman’s love interest Kriti, Jacqueline adds little zing to this party – her role consists of grinning incessantly and delivering mystifying dialogues (“I like karate – it’s like, so, hah!”) in an accent that reminds you – with longing – of Katrina Kaif. Kay Kay is much too leashed – despite
his ability, Malhotra’s malevolence simply doesn’t ooze through. As Raka, who literally enjoys toxic power, Nathan Jones growls, grunts and grins in a manic sort of way.
These don’t make him scary – just cartoonish.
And there lies the trouble with A Flying Jatt – the full, stark shebang of a superhero versus super-dark powers never comes through. The villains remain cardboard cut-outs and the clash grows predictable. These thrills don’t chill. On the upside, for children, A Flying Jatt provides clean entertainment – with its innocence, it evokes more Haathi Mere Saathi and less cool-cat Krrish. The film takes off only because of its simplicity – a flying jatt who’s afraid of heights, a rarity in dark times of Udta Punjabs.

Author adminPosted on November 5, 2013
According to a survey carried out by popular matrimony site, young superstar actors Ranbir Kapoor andDeepika Padukone have emerged as the most sought after...
Read More

Author adminPosted on May 5, 2013May 6, 2013
Aamir Khan was tirelessly rehearsing at the YRF studios for the Dhoom 3 dance sequence, when all of a sudden, the actor lost focus...
Read More
Sync Tainment
Author syncmagPosted on March 14, 2013April 11, 2013
Aamir Khan is all set to meet Brit Prime Minister David Cameron. Cameron who is in India for a short trip is meeting top...
Read More

Author adminPosted on November 5, 2013November 5, 2013
Pakistani singer Adnan Sami has shot to fame in India for his soulful voice and marvelous singing. However if reports are to be believed...
Read More