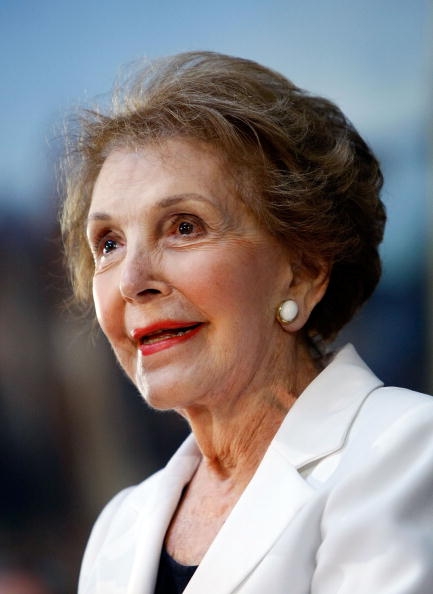 Nancy Reagan, the former actress who was fiercely protective of husband Ronald Reagan through a Hollywood career, eight years in the White House, an assassination attempt and her husband’s Alzheimer’s disease, died at her Los Angeles home on Sunday, March 6th at age 94.

The cause of death was congestive heart failure. “She is once again with the man she loved,” her stepson Michael Reagan wrote on Twitter.

Reagan became one of the most influential first ladies in U.S. history during her Republican husband’s presidency from 1981 to 1989.

Her husband, who affectionately called her “Mommy” while she called him “Ronnie,” died in 2004 after a long struggle with Alzheimer’s, the progressive brain disorder that destroys memory.
As news of Nancy Reagan’s death spread, tributes poured in from Washington to Hollywood.
President Barack Obama, a Democrat, and first lady Michelle Obama said Nancy Reagan redefined the role of first lady.

“Nancy Reagan once wrote that nothing could prepare you for living in the White House,” the Obamas wrote in a joint statement on Sunday. “She was right, of course. But we had a head start, because we were fortunate to benefit from her proud example, and her warm and generous advice.”

Former first lady Barbara Bush said she and her husband, former President George H. W. Bush, who was vice president under Reagan, took comfort in knowing Nancy Reagan would be reunited with her husband, the late president.

The Hollywood glitterati weighed in on social media, many of them grieving the passing of an icon they remembered having grown up in the Reagan era.

“I sat near #Nancy Reagan once and felt like a teenager seeing one of my idols. She was a BOSS,” wrote actress Elizabeth Banks of “The Hunger Games” fame.

Arnold Schwarzenegger, who like Ronald Reagan rode his Hollywood fame to the governor’s office in California, said on Twitter that Nancy Reagan was “one of my heroes.”

Nancy Davis was a Hollywood actress during the 1940s and 1950s and married Reagan, a prominent film actor, in 1952. She then served as first lady of California during her husband’s stint as California governor from 1967 to 1975 before moving into the White House after his decisive victory over incumbent Democratic President Jimmy Carter in 1980.

Her most publicized project as first lady was the “Just Say No” anti-drug campaign. After her husband developed Alzheimer’s disease, she became an advocate for discovering a cure.

She was diminutive and publicly soft-spoken, but Nancy Reagan’s strong will, high-tone tastes and clout with her husband made her a controversial figure during his presidency.

As Reagan’s wife, political partner and adviser, she became one of America’s most potent first ladies, alongside the likes of Franklin Roosevelt’s wife, Eleanor, Woodrow Wilson’s wife, Edith, and Bill Clinton’s wife, Hillary.

“I see the first lady as another means to keep a president from becoming isolated,” she said in 1985. “I talk to people. They tell me things. And if something is about to become a problem, I’m not above calling a staff person and asking about it. I’m a woman who loves her husband and I make no apologies for looking out for his personal and political welfare.”

Tiny and frail in her later years, Reagan devoted her time to caring for her ailing husband at their home in Los Angeles’ exclusive Bel Air enclave. She was always a stickler for protocol and detail and stoically presided over the former president’s weeklong funeral and celebration of his life in June 2004.

The former president’s Alzheimer’s struggle made Mrs. Reagan a campaigner for broader human embryonic stem cell research, a stand that put her at odds with many Republicans.

“Ronnie’s long journey has finally taken him to a distant place where I can no longer reach him. Because of this, I’m determined to do whatever I can to save other families from this pain,” she said before his death in 2004.

Some critics dismissed her “Just Say No” efforts as simplistic but she became America’s most visible anti-drug crusader at a time when the crack cocaine epidemic was raging.

In 1988, she addressed the U.N. General Assembly, saying the United States must do more with tougher law enforcement and anti-drug education efforts and should stop blaming the poor nations that produce most of the narcotics used by Americans.

“We will not get anywhere if we place a heavier burden of action on foreign governments than on America’s own mayors, judges and legislators. You see, the cocaine cartel does not begin in Medellin, Colombia. It begins in the streets of New York, Miami, Los Angeles and every American city where crack is bought and sold,” she told the General Assembly.

After leaving the White House, she created the Nancy Reagan Foundation to continue her anti-drug campaign. The organization helped develop the Nancy Reagan Afterschool Program in 1994 aimed at drug prevention and life skills for youth.

She’d had her own medical challenges. She was diagnosed with breast cancer in 1987 and underwent a mastectomy.
But she maintained an upbeat view — even when it didn’t involve gazing adoringly at her husband, as she famously did in countless pictures.

In a 2001 interview, which took place on Ronald Reagan’s 90th birthday, CNN’s Larry King asked the former first lady whether she felt that fate had treated her badly.

“No, no. When you balance it all out, I’ve had a pretty fabulous life,” she said.

“Nancy and Ronald Reagan were one of the great love stories of the American presidency,” said Craig Shirley, Ronald Reagan biographer and presidential historian.

Sharmeen Obaid-Chinoy & A Girl In The River

Author adminPosted on June 25, 2016
Sunidhi Chauhan, one of India’s top 10 singer, has been entertaining audiences for over 15 years. Chauhan is praised by the best, including Lata...
Read More
Sync Rendezvous
Author syncmagPosted on March 25, 2013May 17, 2013
Maha Shivratri is a Hindu festival celebrated every year in reverence of Lord Shiva. It is also known as padmarajarathri. Shivaratri literally means the...
Read More
Sync Rendezvous
Author syncmagPosted on March 28, 2013October 23, 2013
“If I have to make a film about my life so far, then it will be a full-of-masala (spice) flick”. Bio: Adnan Sami Khan...
Read More

Shreya Goshal – A Golden Voice of the World!

Author adminPosted on September 23, 2013
A mellifluous voice is a gift from God, but what you do with it makes for individual talent. A golden voice, the mesmerizing singer...
Read More

MOHAMMAD ZAMIR – a Candidate for LaSalle-Émard-Verdun

Author adminPosted on June 25, 2016
Mr. Mohammad ZAMIR, was born and raised in Abbottabad, Pakistan and migrated to Canada in 2005. He is Chief Executive of the UMEED Television...
Read More