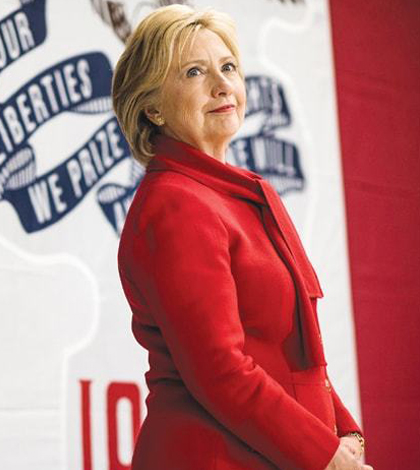 WASHINGTON: On the subject of women in politics, Hillary Clinton is fond of quoting the
words of another illustrious first lady, Eleanor Roosevelt, who once said: “You need to grow
a skin as thick as a rhinoceros.” When out on the stump, in cafes, churches and rallies
across the country, Clinton talks of the adversity she has faced down over the course of
four decades in public life. “I have the scars to prove it,” quips the former secretary of state,
painted by her enemies as “crooked”, “corrupt” and even an enabler of her husband’s affairs.
A Machiavellian image clings to the ambitious Midwesterner, dating back to her years in the
political spotlight as a tandem with Bill.

She is considered “dishonest” by a majority of Americans, and the mudslinging is only set to intensify as she heads into a brutal showdown with presidential rival Donald Trump. And yet, at age 68, Clinton now
stands at the threshold of the White House. This week she will formally become her party’s nominee at the Democratic National Convention in Philadelphia, making history as the first woman to carry the colours of a major US political party in the presidential race.“Yes, there are still ceilings to break for women and men, for all of us. But don’t let anyone tell you that great things can’t happen in America,” Clinton told supporters at a rally in New York, fired up by her victory in the Democratic primaries. President Barack Obama, campaigning with her early this month, said “there has never been any man or woman more qualified for this office than Hillary Clinton. And that’s the truth.” From Chicago to Arkansas

Hillary Diane Rodham was born on Oct 26, 1947 and raised in a middle-class household in Chicago suburb Park Ridge. She adored her mother Dorothy but described her father, Hugh Rodham, born from Welsh immigrants, as a stubborn and rigid taskmaster. He imposed his work ethic on young Hillary, but
also his frugality. She still puts uneaten olives back in the jar and is loath to waste anything,
she wrote in her 2003 autobiography, Living History. Clinton shared her father’s Republican convictions in adolescence, as well as his thunderous laugh. The family is Methodist, and to this day Hillary remains
in the church. Since her school days, she chased success, earning honours and accolades that could fill a bookcase. Smart and ambitious, Clinton was admitted in 1965 to Wellesley, an elite women’s college
near Harvard, and eventually elected class president. It was the social tumult of the sixties, and Clinton learned of the struggle for civil rights, the explosive debate over Vietnam and the fight for gender equality. When she was accepted in 1969 at Yale Law School, she met Bill Clinton, the “Viking”
from Arkansas who would change the course of her life. After working for the Children’s Defense Fund, and a period in Washington in 1974 on the commission investigating the Watergate scandal, she gave in and joined Bill in Arkansas. He was soon elected governor and Hillary Rodham joined a prestigious law
firm, eventually becoming its first female partner. Chelsea, their only child, was born in 1980.

Author adminPosted on May 27, 2013
QUEBEC — The Quebec government has tabled legislation which could impose a moratorium on exploration for shale gas in the St. Lawrence River valley...
Read More