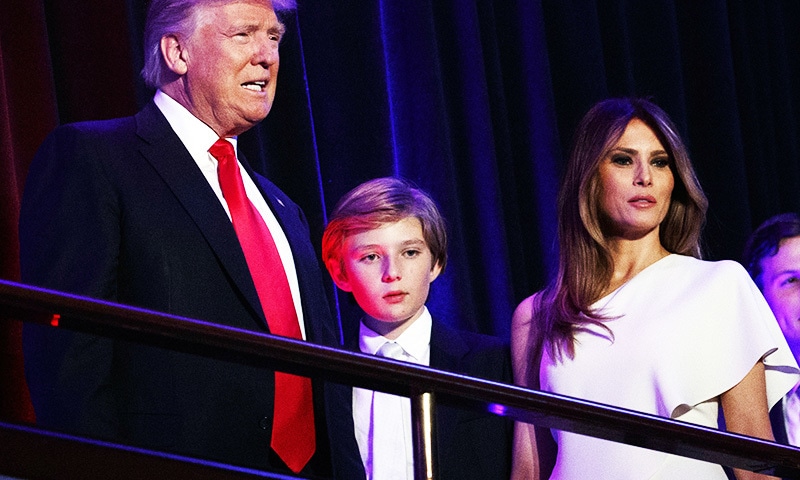 t will be one of many unusual things about a Donald Trump administration: a long-distance first lady.
Trump will move into the White House after the Jan 20 inauguration. Breaking with tradition, Melania Trump and 10-year-old son Barron plan to remain in New York City until at least the end of the school year.
While the decision sets Melania Trump apart from other first ladies both Michelle Obama and Hillary Clinton took on the move with school-age children in tow it seems in character.
The former model and naturalized US citizen from Slovenia was an elusive figure in the campaign and had no political experience before her husband’s stunningly successful outsider campaign.
“We’re in a time when all the molds are being broken,” said Katherine Jellison, head of the history department at Ohio University and an authority on first ladies.
“That may be the case where we have a redefining of a role that, after all, isn’t in the Constitution.”
Trump spokesman Jason Miller cited “sensitivity” about pulling Barron from school midyear.
In an interview with US Weekly earlier this year, Melania Trump said: “Barron is the priority for now and he needs me at this age. He needs a parent at home, and I like to keep it as normal as possible.”
Anita McBride, chief of staff to Laura Bush during her time in the White House, noted that Michelle Obama also weighed delaying her family’s move for similar reasons, but “ultimately made a different decision and one that suited their family.”
Just how Melania Trump will tackle the White House and how she will be received by the public is unclear.
The first lady usually serves as the official hostess and typically undertakes some kind of advocacy work. Michelle Obama took on childhood obesity and other projects. But being first lady has no official duties or any clear playbook.
Married to Donald Trump for nearly 12 years, Melania Trump is his third wife. A US citizen since 2006, she will be only the second first lady born outside the country. Louisa Catherine Johnson Adams, wife of John Quincy Adams, was born in London to an American father and British mother.

How To Organize A Lab Report

Author adminPosted on August 21, 2013
NEW YORK CITY: Angelina Jolie has topped Forbes magazine’s annual list of top-earning actresses after pulling in an estimated $33 million in a year...
Read More
In-Sync
Author syncmagPosted on March 28, 2013April 11, 2013
KABUL: US Secretary of State John Kerry held a second round of talks with Afghan President Hamid Karzai in Kabul on Tuesday after the...
Read More
In-Sync
Author syncmagPosted on March 25, 2013April 11, 2013
LAHORE: Chief Minister Shahbaz Sharif has said that such people should not be included in caretaker setup as would make the election doubtful, making...
Read More

Author syncmagPosted on January 16, 2013January 17, 2013
Do I hear Imran Khan fans disagreeing? Ah yes, it’s the tsunami they will unleash that will wipe out the world we know and...
Read More